How to Get Started In Fencing: 3 Things to know 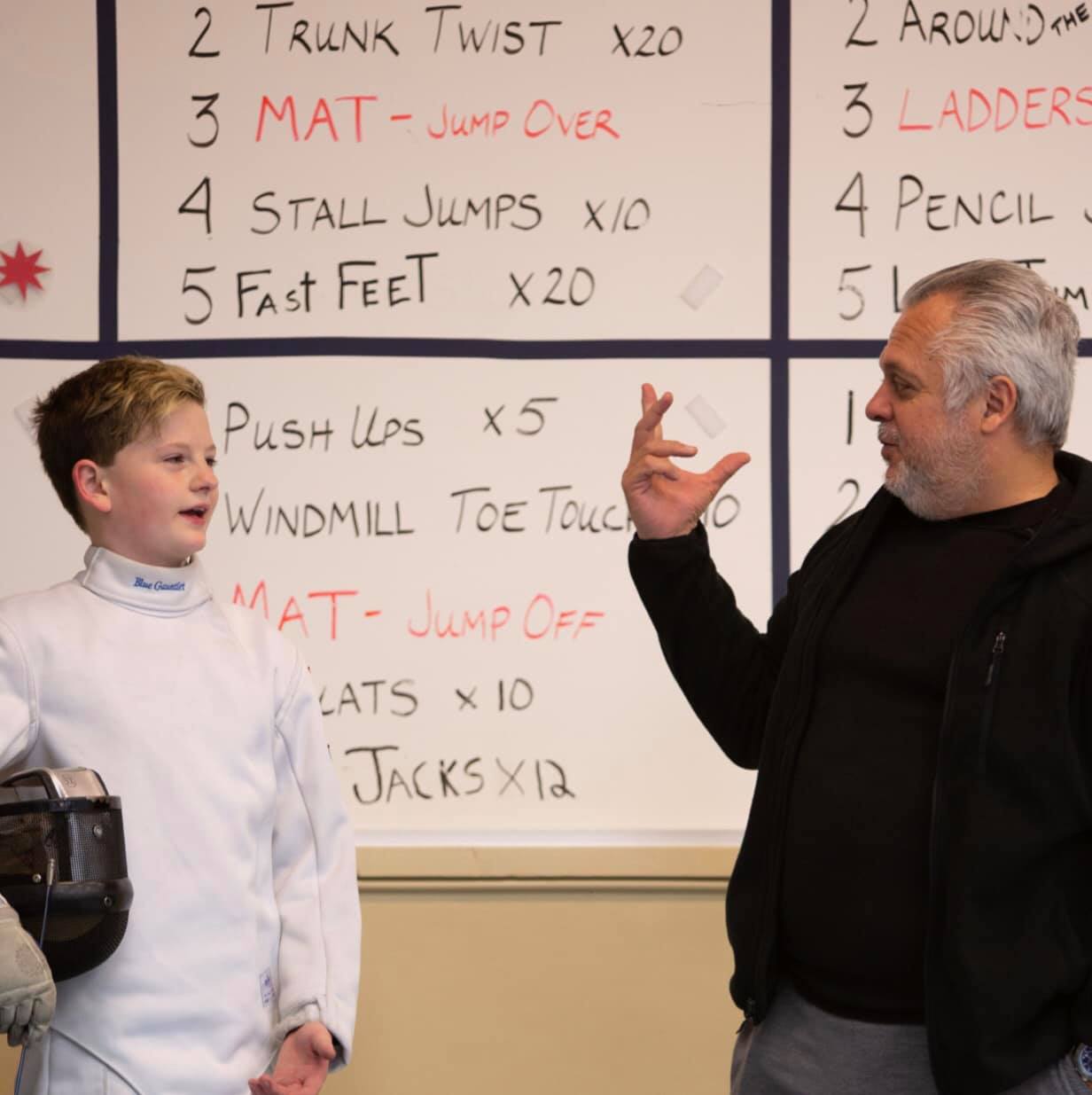 Fencing is an excellent sport, whether you're young or more advanced in age.

Our club has members of all ages winning tournaments.

Because of this, we have people asking how to get started all the time in fencing.

This article will go over some basic things you need to know before getting started: the weapons, the equipment, and what to wear to your class.

First: What Weapons Do Fencers Use? 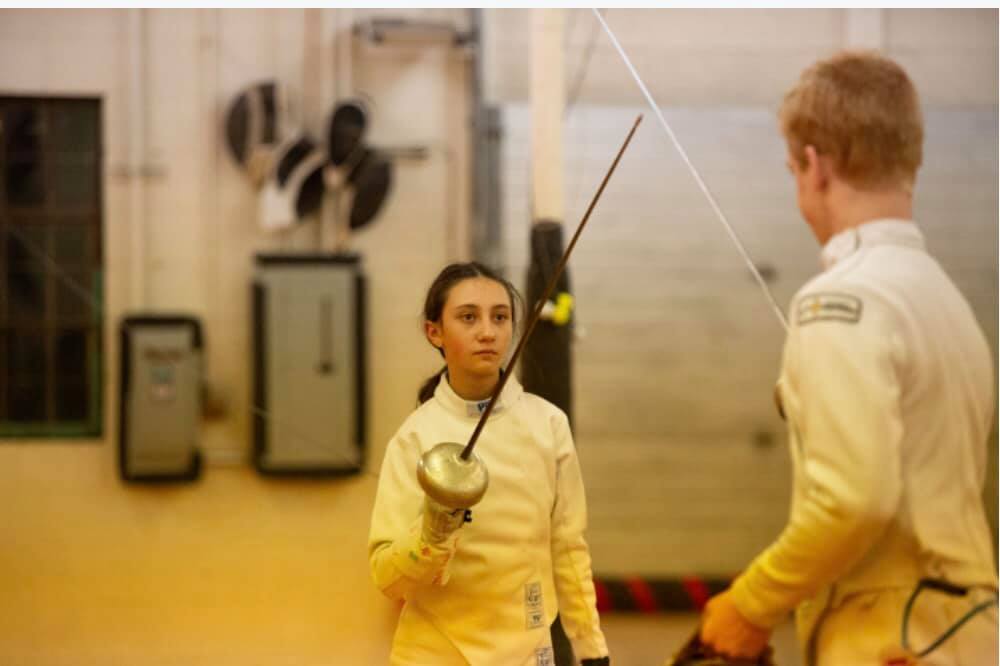 Foil, epee, and sabre are the three weapons used in the Olympic style sport fencing.

Sometimes, fencers compete in all three events, but a fencer will generally develop their skills in one weapon.

What's the difference in the weapons?

Foil and epee are point-thrusting weapons. Meaning you score when you successfully land a "touch" on your opponent.

On the other hand, sabre is a point-thrusting, as well as a cutting weapon.

The target areas differ for the three weapons.

What is Foil Fencing? 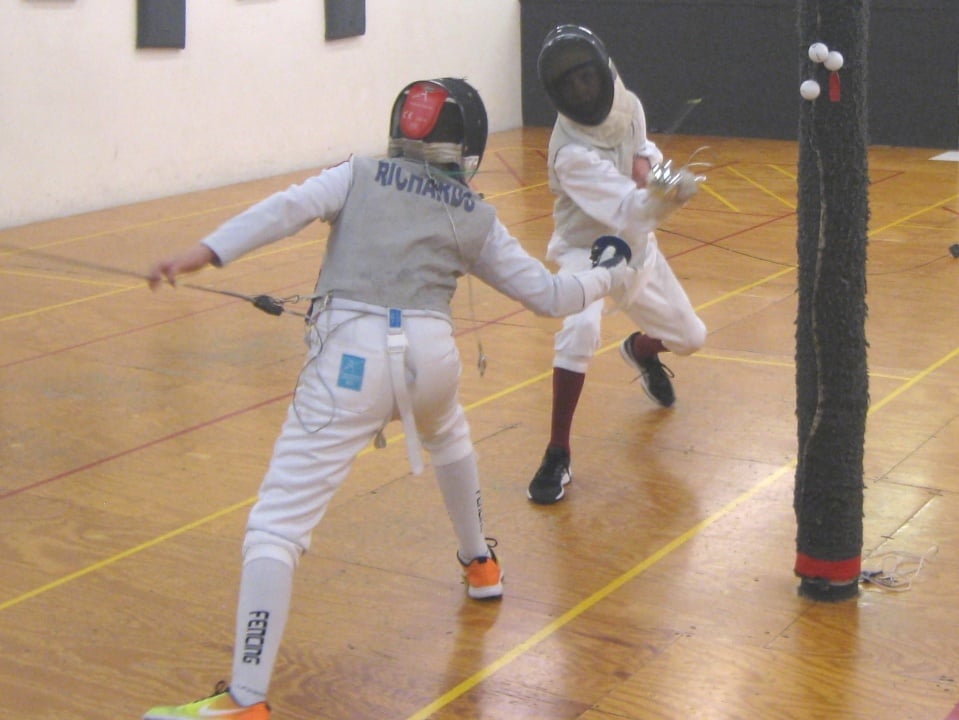 The foil targets the torso, but not the arms or legs.

Points are scored when the tip comes into contact with the opponent from a thrusting motion. Hits with the blade's side, which may happen from a slashing movement, do not register on the electronic scoring apparatus.

If a touch lands outside the target area, also called off-target, there is a stop or halt in the fencing, but no point is awarded.

What is Sabre fencing? 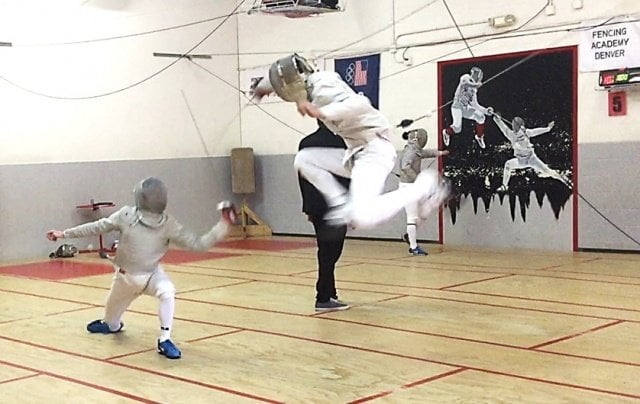 The sabre is a light cutting and thrusting weapon that targets the body above the waist, but not the weapon hand.

Touches that land outside the target area don't score nor stop the fencing.

If both fencers land a scoring touch, the referee determines which fencer receives the point using "right of way."

What is Épée Fencing? 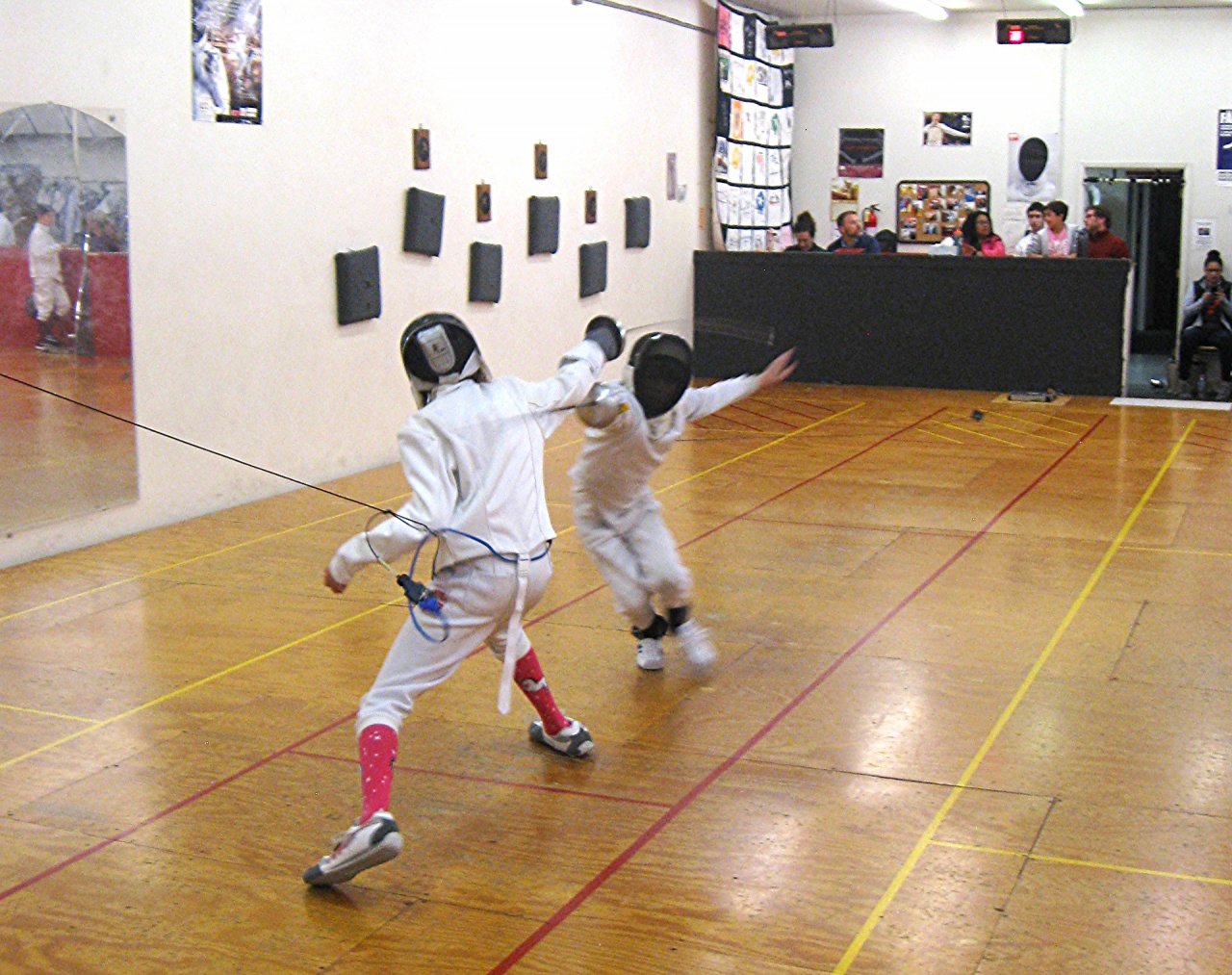 The épée is a thrusting weapon like the foil, but heavier. In épée, the entire body is a valid target.

Like foil, all hits must be with the tip and not the sides of the blade. Collisions with the blade's side do not register on the electronic scoring apparatus and do not stop or halt the fencing.

As the entire body is a legal target, there is no concept of an off-target touch that may stop the fencing.

In épée, if both fencers score at the same time, both gain a point.

There is a special aspect to the épée that separates it from the other fencing weapons known as the counterattack. It is a tactic employed in response to an attack. With the absence of right-of-way, following an attack and landing it correctly can be a highly efficient way to score a touch, thus the counterattack's ubiquity. 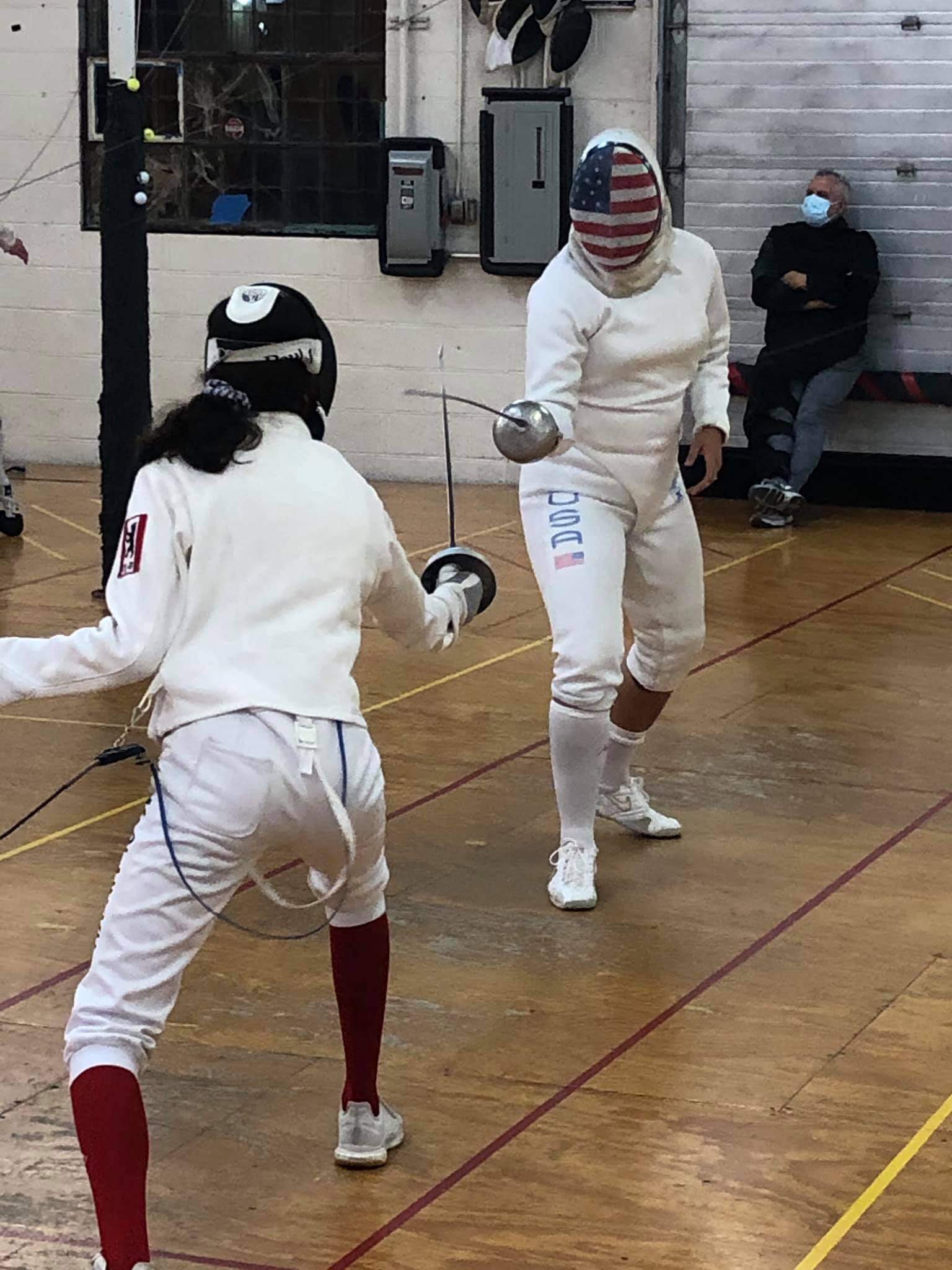 It is sometimes tricky for new people to follow the lightning speed of fencing. To become more comfortable in watching a fencing bout, follow these tips.

Focus on one fencer. Due to a fencer needing to attack and defend, you will see both sides of the engagement.

If there's a hit, the referee stops the bout, describes the actions, and decides whether to award a touch.

Fencers seek to maintain a safe distance from each other.

When one is ready to attack, they may use feints or pure speed to close the distance and score.

The Rule of Right-Of-Way

In foil & sabre, there's a rule of right-of-way.

This rule determines who won a point when both fencers appear to hit at the same time.

The rule says, whoever is attacking first, is on 'offense,’ and the other fencer is on "defense."

Points are awarded to the opponent on offense.

Epee does not use the right-of-way in keeping with its dueling origin - he who first gains the touch earns the point.

Or, if both fencers hit within 1/25th of a second of each other, both earn a point.

What Equipment is Used in Fencing? 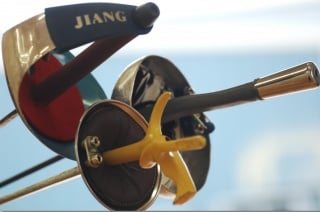 The jacket is form-fitting and has a strap that passes between the legs.

The jacket also has a small piece of fabric sewn around the collar to prevent an opponent's blade from slipping under the mask and poking the neck.

A plastron is an underarm protector worn underneath the jacket. It provides double protection on the side of the sword arm and upper arm.

A glove protects the sword hand with a gauntlet that prevents blades from going up the sleeve and causing injury. The glove also improves grip.

Knickers are short trousers that end just below the knee. The knickers are required to have 10 cm of overlap with the jacket. Most come equipped with suspenders.

Fencing socks are long enough to cover the knee so that no skin is showing between the knickers and socks.

Fencing shoes have flat soles with reinforcement inside the toe and heel. The reinforcement prevents wear and tear from the footwork including lunging.

The fencing mask has a bib that protects the neck. There are two grades of protection for fencing masks usually referred to as non-FIE and FIE.

Both conform to US Fencing safety requirements for tournament competition.

Non-FIE is the entry-level face mask with a mesh that can withstand a 12kg punch test along with bib material rated for 350NW against punctures.

The advanced grade mask is known as FIE. These are rated for the international competition up to World Championships and the Olympics.

The mesh they are made of is stronger than basic masks. The bib area is rated at 1600NW.

A chest protector, made of plastic, is worn by female fencers and, sometimes, males. Fencing instructors also wear them, as they are hit far more often during training than their students.

Lamé is a layer of electrically conductive material worn over the fencing jacket. The lamé covers the entire target area and determines whether the touch was on the target or off-target.

A body cord is necessary to register the score. It attaches to the weapon, runs inside the jacket sleeve, then down the back and out to the scoring box.

In sabre and foil fencing, the body cord connects to the lamé to create a circuit to the scoring box.

What To Wear To Fencing Class

For beginner classes, wear sneakers with non-marking soles and comfortable athletic clothes that allow a full range of motion.

Advanced Beginner students should buy a glove, which can be purchased through the club.

Intermediate students may borrow club gear for up to three months. We will assist with fitting and purchasing recommendations.

For Open Bouting, remember to bring your tall socks!

Duke City Fencing offers after-school fencing classes for kids aged 6 through 15 and evening lessons for adults. We teach the Olympic sport style of fencing with a focus on epee. We offer classes for all skill levels, from Intro to Fencing for first-timers to Competitive for fencers who travel and compete.

We offer sibling and family discounts, and everyone's first visit with us is free!

Our open times are listed below.